As adorable as dogs are, training them can be a pain. That’s why pet owners must be patient and remember that the hard times will be worth it in the end. Fortunately, people can use tools like dog crates to make the training process a little easier on themselves. Here are some of the biggest crate training mistakes to avoid for folks new to the game.

Too Much or Too Little Time in the Crate

Crate training is all about balance. Pet owners shouldn’t leave their pups in the crate all day. Conversely, letting them roam free in the house will make it harder to entice them into their crate at bedtime. As a result, folks have to divide up their time evenly. Perhaps they should think about leaving their pet in the crate for a few hours in the afternoon and allowing them to stretch their legs in the evening.

Pro Tip: Pet owners shouldn’t give into crying. Although it’s tough, people have to let their dogs cry a bit instead of just giving them what they want.

Using the Crate as Punishment

The end goal is for dogs to want to go in their crates. A previous blog post discussed why it’s important for dogs to have personal space. Hopefully, your dog’s crate can become a place of solace for them. Since the crate should be a happy place, people shouldn’t use it as a form of punishment. No one can expect their pet to go willingly into their crates if that’s where they spend their timeouts. So, owners must think of a different punishment spot for their furry friends if they want crate training to go well.

Putting the Crate in Another Room

Another one of the biggest crate training mistakes to avoid is putting the crate in another room. Some people do this so they don’t have to listen to puppy cries. However, folks don’t realize that this solution makes the problem worse. When a dog is isolated from their owners, they become incredibly anxious. For this reason, they’re crying will likely intensify until they’re reunited with their human again. Consequently, people just have to suffer through the whines until their dog gets used to their crate.

Crate training is essential for owners and their dogs. For starters, crates stop pups from wreaking havoc on the home when their owners are away. Crates also come in handy when guests come over because dogs won’t jump all over visitors when they arrive. Again, as advantageous as crate training is, pet owners must be willing to put in the work. People should start the process by buying helpful tools at Gorilla Dog Beds. We offer indestructible crate pads that canines can chew on in case they get nervous. These items are perfect because they won’t rip, and they allow dogs to let out all their anxieties in a safe way. 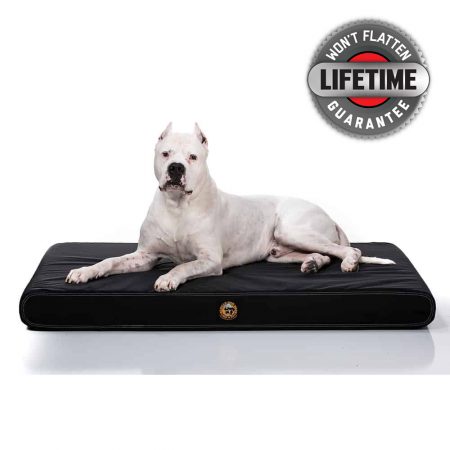